May 05, 2015
The last post I made on this blog was in mid-March.
I blinked and then all of a sudden April is over and we're now in May.
Where the hell has the time gone?

I can't really explain/justify my absence from blogging.
April is my birthday month and it's generally a busy month, but this month was even more busy because I was out of town for a work conference.

I went to New Orleans, LA. It was...interesting.
There were four of us who went total: my boss, a lady from Finance, an IT person, and myself.
Turns out my boss and the Finance lady are childhood friends, needless to say I felt like the 3rd wheel at times. Then the Finance lady's two guests arrived, the IT guy had his wife with him, and I just kind of realized that maybe I should've brought someone too, since this was that kind of trip. I probably would've had a better time. Though I did bond with the IT guy, always good to have a buddy in IT.

As it stands, the trip wasn't horrible. The weather kind of sucked, just constant rain.
I loved our hotel, and the proximity of it to several stores and the conference center.
I also loved my view, and how could I not? 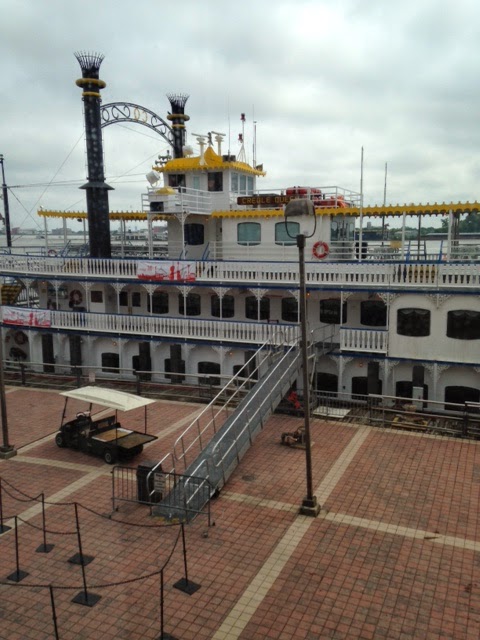 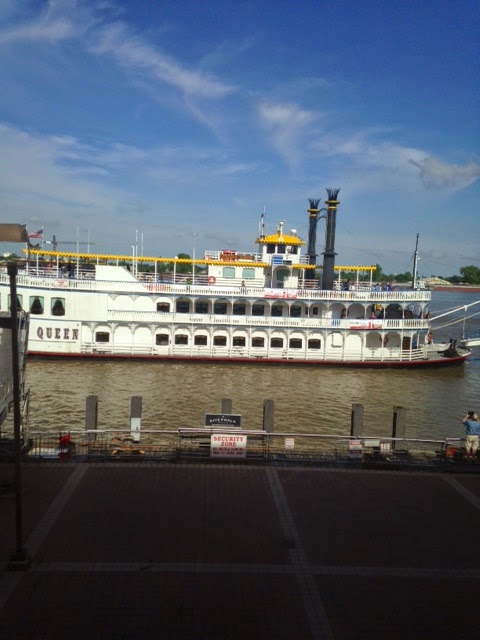 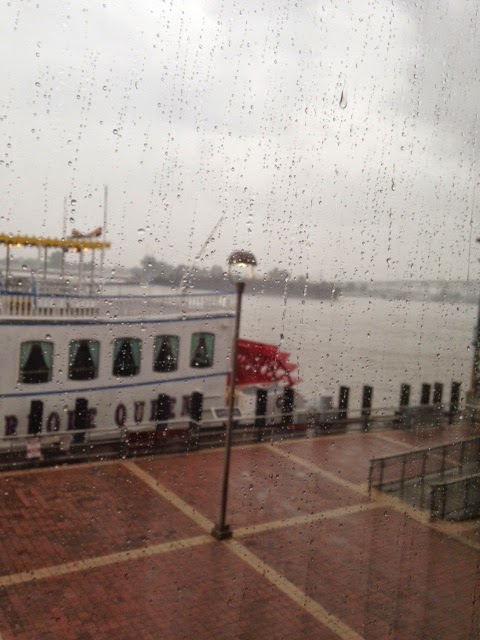 Even when it rained, I had the "Creole Queen" docked outside my window to brighten up my view. Unfortunately, I didn't get to check her out. We didn't do much touristy stuff, other than going to Bourbon St and the French Quarter. 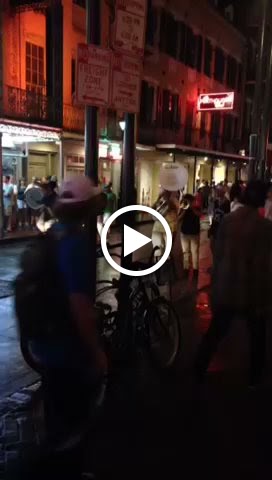 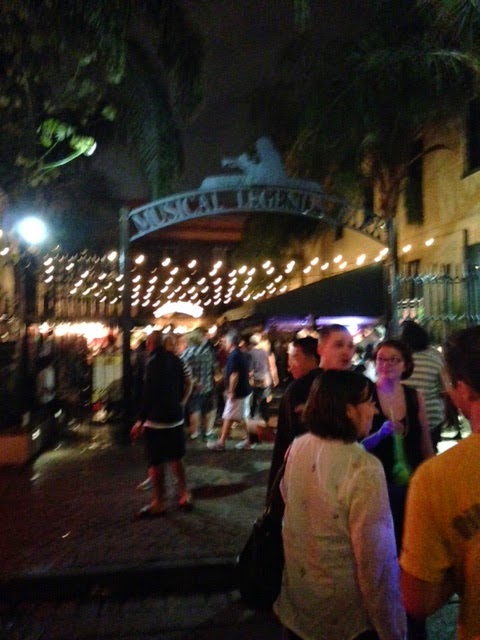 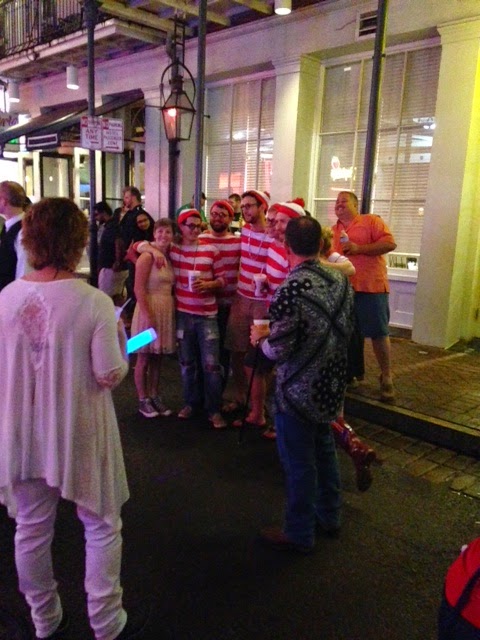 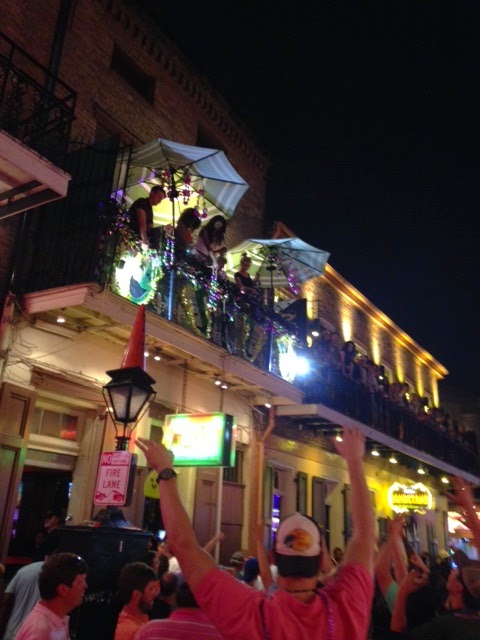 No, I didn't get any beads. Not that you needed to flash anyone for them. Maybe that's just during Mardi Gras? We did have a funny moment in which we had to explain to my boss how you typically "earn" beads. Turns out she posted a selfie on her Facebook, wearing some beads she had gotten and her friends and daughters were going a little crazy in the comments, demanding to know what she did to earn them. It was pretty funny. She said she felt naive for not knowing. But she definitely won't forget now.

One thing I did enjoy and was able to scratch off my bucket list is tasting the much-hyped beignets from Cafe du Monde. There was once a short walking distance from the hotel and I'm not going to sit here and act like I only have them once. They were SO good! Some people described them as elephant ears. They're just fluffy pieces of dough deep fried and smothered in powdered sugar. Sounds simple enough, but when accompanied with a frozen cafe au lait, was just out of this world. 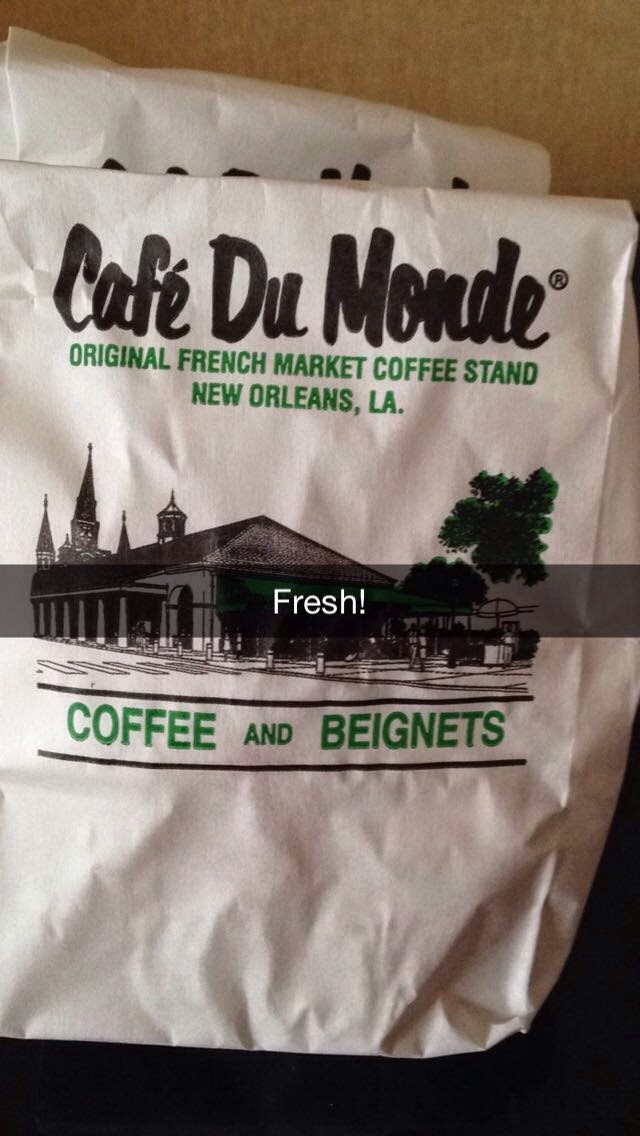 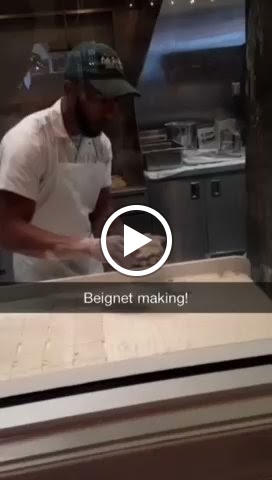 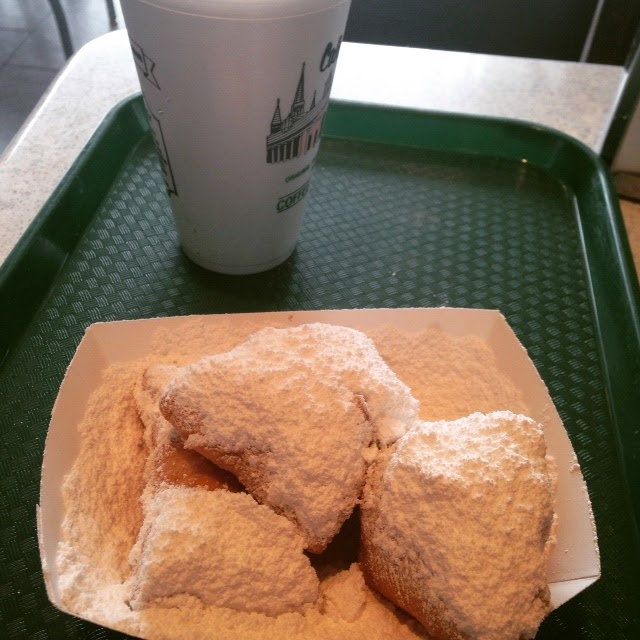 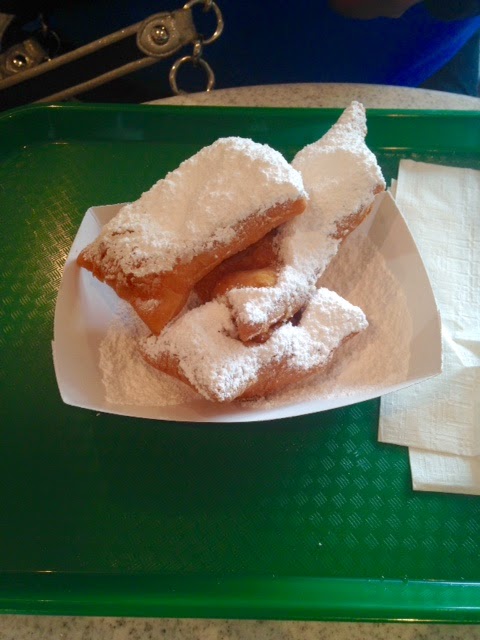 The day before we left, the conference organizers had a Customer Appreciation Event that was being held in Mardi Grad World, the place where they create all the floats for Mardi Gras. We got there and enjoyed the sights, and I also had some traditional red beans and rice and then my new favorite dessert: bread pudding. Wow. I've seen it before and it never drew my attention, but this stuff is goooood! The party itself was kind of dead, but the floats were nice to see. 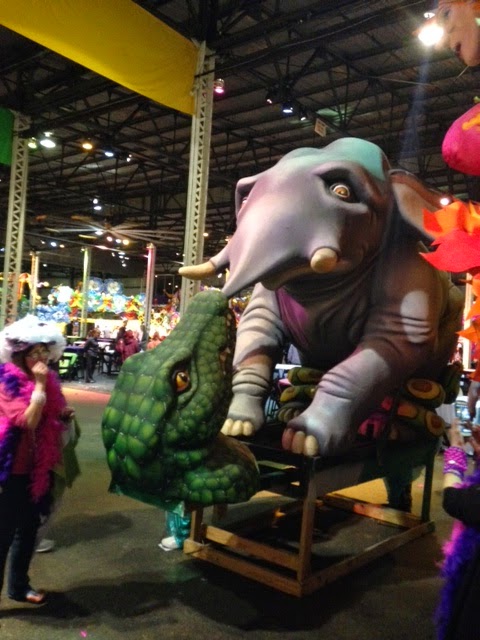 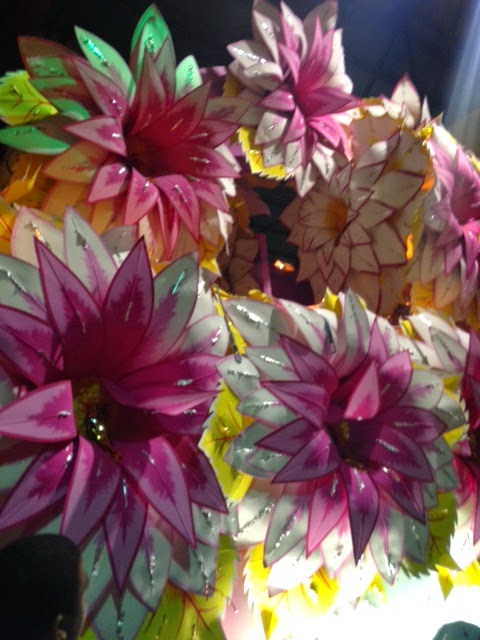 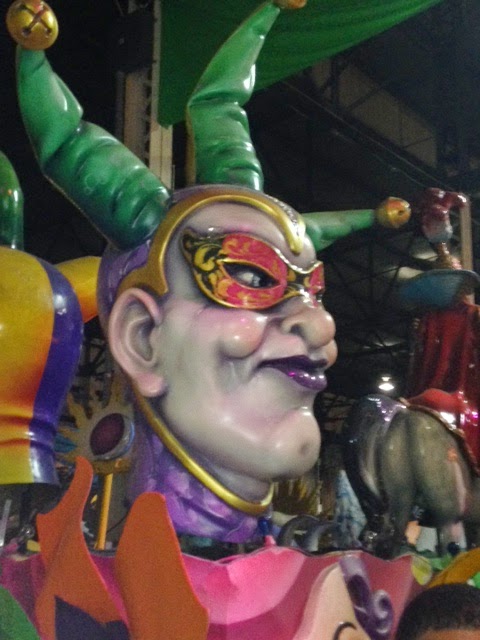 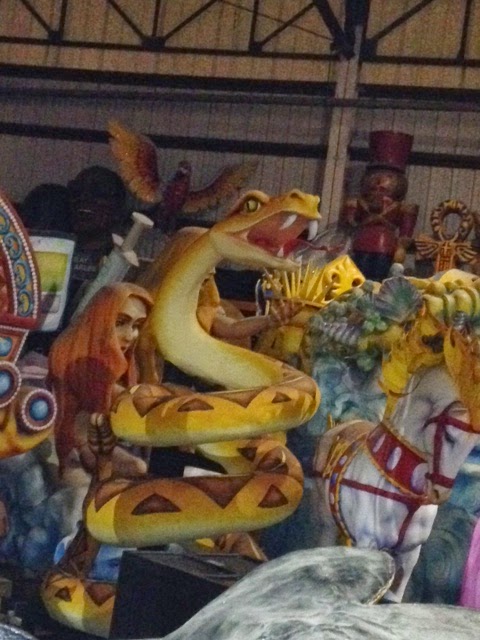 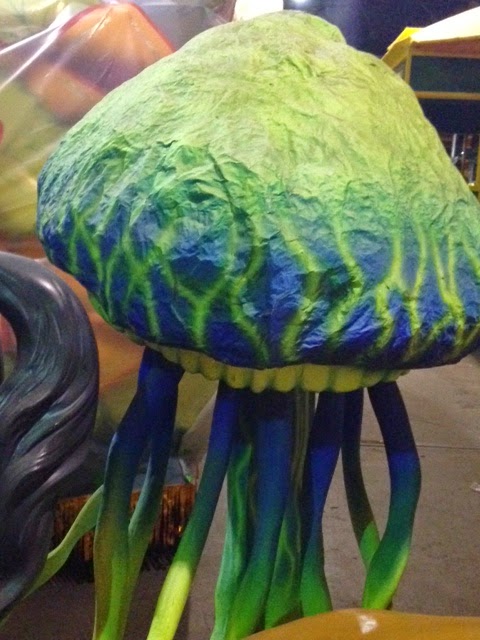 The conference itself was kind of blah, sorry to say. It was way overcrowded. Out of all my sessions, I was only able to get a seat at two of them, and I registered way in advance. I'm not crazy about crowds, so that was kind of hard to get over. They did provide us food and drinks and that was appreciated. The material presented was interested, though at times sounded like a sales pitch for the newest, innovative products, but other than that it was all right. Maybe I just had different expectations.

If I had to do it all over again though, I would. It was a new experience, tried new, delicious foods, flew on my own, and got my own King sized bed! Can't beat that!

September 07, 2017
I've been a little (a lot) delayed in posting.I do want to talk more about my pregnancy and my experience throughout, but I can't ignore the elephant in the room which is that the baby is already here. So I am going to skip ahead a bit and work my way back. Yes, my Peanut was born March 10th, 2017. I will save the labor & delivery story for a later (longer) post. Let's just say it was a long and strenuous process. Peanut is going to be 6 months in a few days. I will have his exact weight and measurement next week at his doctor's appointment. I doubt he is still at the same 14 lbs he weighed at his 4 month appointment as he is growing very fast. He has his two front bottom teeth, he's been rocking them since 4 1/2 months, even though the doctor said it was too early for him to be teething. Take that, doc! He has super long hair and has actually already had his first haircut, at 4 months. He already needs another one. Peanut can fly up and down the living
Read more

August 28, 2017
I decided to tell my sister first. It was a Friday, and I was off because of summer hours and decided to invite her to brunch. While at brunch, I played her the video of me telling my husband. She had a hard time hearing it, but when she finally got the message, she cried tears of joy. I have rarely seen my sister cry as an adult and I was definitely not expecting that reaction, but I was so thankful that I secretly recorded it. My husband couldn't believe she cried either and he says it's his favorite reaction. Next was my brother. I told him and my parents the same day, but told him first. We had gotten together to celebrate my husband, brother's and sister's birthdays, since they are within days of each other. We were having a BBQ at my parent's. So I caught my brother in the garage and played him the video of me telling my sister. He also couldn't hear it (I think my family all needs hearing tests), so I had to explain to him the video with "I&#
Read more