October 02, 2017
As I mentioned before, we were blessed with three baby showers. They were hosted by my husband's job, my family and my job. This was an unexpected turn of events. I didn't think people liked me enough to throw me a shower at work, but they did.

My husband's job had one for him first, it was really nice. They got us tons of stuff! They all really seem to love him, as they should because that man bends over backwards to be helpful. I don't do that, which is why I thought I wouldn't get one. This was my first time meeting his co-workers, and they were all really nice and we ate and played games, it was fun.

My job threw one for me as well, a couple of weeks before my last day. It was really nice as well. We had games and cake and lots of nice presents. I felt really special at seeing how everyone contributed to my Peanut. I'm not always a fan of the people I work with, and I know I wasn't while pregnant due to my excessive crankiness, but it was touching to see them come together for me and my family. They're all good people. May not be the most competent employees, but they're not bad people.

My family threw a shower for me and again, I was really touched at the amount of people that cared enough about us to attend and contribute and assist with the party. I didn't cry at any of our showers, but I sure felt like it. I know some people hate showers and see them as a gift-grabbing ploy, but I mean, everyone was fed and taken care of, and I've attended plenty of showers in my life, so I didn't feel bad having one. No one was forced to attend and contribute. People did it because they wanted to. Or because my sister scared them into attending, ha ha.

My sister and my mom organized my shower. The theme was elephants and giraffes, to match the nursery. 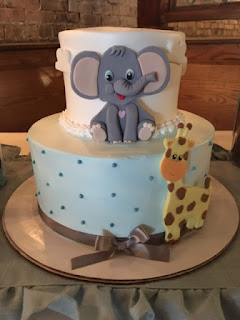 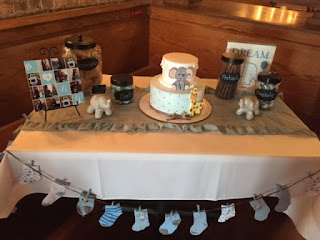 As you can see, everything was so cute! (I'm biased, of course.) The shower was held in this Italian restaurant not far from my house, which was super convenient because we didn't have far to drive. We arrived fashionably late, as directed by my sister. My  husband was in attendance also. He was a bit reluctant to stay for the whole thing, but since my sister knows me pretty well, it wasn't a long, drawn out shower. She was on a schedule and I loved it!

We arrived, greeted everyone and ate, then we had games, then present opening. It was from 12:30p and out by 4pm (if I recall correctly) and we were out by the scheduled time. I loved the decor, the food, the cake, the games, everything! She even opted not to play this one traditional baby shower game that I hate because it gives me anxiety. The prizes were super cute, contained in little mason jars. The centerpieces were banks in the shape of elephants and giraffes. My mom even made a diaper cake for me. All in all, I loved it all and felt very special.

My sister is not a fan of public speaking (and I can relate too well), so she powered through (with some help) and managed to be hilarious in the process. I had a few guests praise her on their way out, saying she was very entertaining and funny. She probably doesn't think so, but she did sooo good. I almost peed on myself at one point, though Peanut was partially to blame for that one.

We had to load up a few trucks with all of our gifts and head home. After everyone had left and my husband and I were organizing some stuff in the nursery, I broke down in tears at how loved I felt. I'm sure the hormones didn't help, but I really, really appreciated the effort from everyone. From my mom and sister, who really aren't into hosting, but did an awesome job,  to my sister's friends who helped with some of the procuring of items, to my friends and family that attended, to the people who stayed to help load gifts and clean up, I just felt really loved and special and I was so happy for my baby. He wasn't even here yet and already had loads of people loving on him and I knew once he got here it would be more of the same. He is a lucky, lucky boy, as are we.

September 07, 2017
I've been a little (a lot) delayed in posting.I do want to talk more about my pregnancy and my experience throughout, but I can't ignore the elephant in the room which is that the baby is already here. So I am going to skip ahead a bit and work my way back. Yes, my Peanut was born March 10th, 2017. I will save the labor & delivery story for a later (longer) post. Let's just say it was a long and strenuous process. Peanut is going to be 6 months in a few days. I will have his exact weight and measurement next week at his doctor's appointment. I doubt he is still at the same 14 lbs he weighed at his 4 month appointment as he is growing very fast. He has his two front bottom teeth, he's been rocking them since 4 1/2 months, even though the doctor said it was too early for him to be teething. Take that, doc! He has super long hair and has actually already had his first haircut, at 4 months. He already needs another one. Peanut can fly up and down the living
Read more

August 28, 2017
I decided to tell my sister first. It was a Friday, and I was off because of summer hours and decided to invite her to brunch. While at brunch, I played her the video of me telling my husband. She had a hard time hearing it, but when she finally got the message, she cried tears of joy. I have rarely seen my sister cry as an adult and I was definitely not expecting that reaction, but I was so thankful that I secretly recorded it. My husband couldn't believe she cried either and he says it's his favorite reaction. Next was my brother. I told him and my parents the same day, but told him first. We had gotten together to celebrate my husband, brother's and sister's birthdays, since they are within days of each other. We were having a BBQ at my parent's. So I caught my brother in the garage and played him the video of me telling my sister. He also couldn't hear it (I think my family all needs hearing tests), so I had to explain to him the video with "I&#
Read more